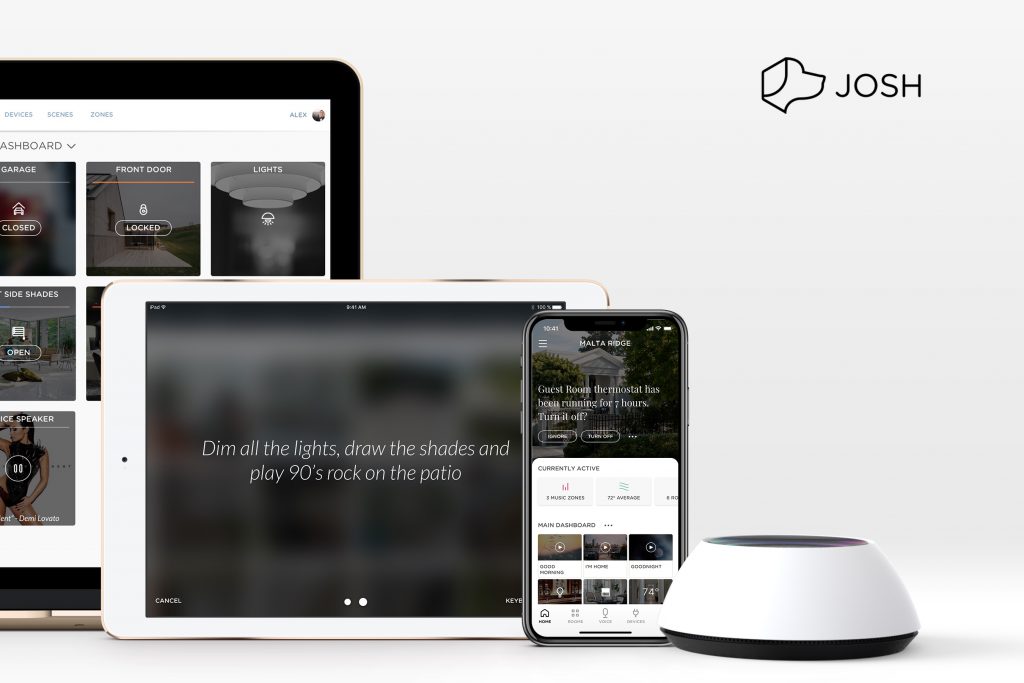 If you’re someone who enjoys the flexibility and ease of utilizing voice automation, you’re going to love Josh voice control technology. Where other devices such as Amazon’s Alexa and Google’s Echo have faltered in user-friendly command execution and privacy concerns, Josh forges ahead with AI the way the movies do it.

With one-size-fits-all voice control devices such as Alexa and Echo, the coding involved in creating speech recognition commands for execution is incredibly generic, which has caused somewhat of a problem and a growing frustration among users.

The team at Josh.ai spent countless hours interpreting all the different ways someone could say a command. What does that mean for you, the user? Well, let’s take a look:

If you told Alexa to “Arm the security system” but the coded command was actually “Arm the burglary system”, you would wake the next morning to find that your security system had, in fact, never been armed. All because of a simple word swap.

However, Josh Voice Control has built-in all the multiple uses of words and phrases to ensure your commands are properly executed. So that security system could be referred to as an alarm, a burglary system, a security system…you get the picture.

What if You Say a Command That Josh Doesn’t Recognize?

While Josh was designed to be far more intelligent than its counterparts, dialect is constantly changing. So what happens if Josh doesn’t recognize a command you give?

Customizing the coding within your Josh Voice Control system is as easy as a phone call. You simply contact the dealer that installed your Josh, relay the exact phrasing you used, and they can write custom code into your Josh so that executing that command works flawlessly for you moving forward – making Josh much more efficient and less frustrating to use than other voice control devices on the market today. When a customer calls us, they can actually give us the time that they attempted to execute a command, and we can listen to the recorded interaction then customize the interface to accommodate.

Growing concerns among privacy and just how much of your personal data is being stored – and sold – are affecting the way consumers think about their technology, and rightfully so. Other voice control automation systems on the market are known for “always listening”, storing your data, and selling it to third-parties.

Josh.ai takes privacy concerns extremely seriously. That’s why your Josh Voice Control system doesn’t store your data, and no information is given to outside marketing companies. It is simply built to hear your voice command and execute it, giving you more peace of mind in what you bring into your home.

How Can I Install Josh Voice Control in My Home?

In order to bring the intelligence of Josh into your home, you’ll need to work with an authorized dealer. They will help tailor Josh to be exactly what you need.

Josh Voice Control works collectively with your smart home automation system and comes with a user-friendly interface you can access through a mobile device or tablet. You can even control things manually, see what’s happening with your home, and talk to Josh through your smart device.

Our technicians at MediaTech have over 75 years of combined experience in smart home automation technology. We are proud to offer installation services for Josh Voice Control. Give us a call today at 630.444.0011.

To learn more about Josh.ai and how it can work in your home, go here.